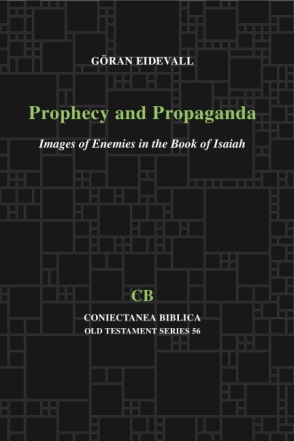 Ideological language, such as the Zion-centered perspective and the legendary version of the events in 701 BCE, is paradigmatic in Isaiah, raising the question to what extent the prophecies therein can be understood as instances of contextually determined (and continually reworked and reinterpreted) political propaganda. The final editors belonged to a party supporting the religious politics of Ezra and Nehemiah. Although they describe themselves as humble servants and as marginalized victims of persecution, it is likely that they actually represented circles with access to the power structures of their time.

A must-read for anyone studying perspectives on Isaiah in scholarly research today.

1. Outlining the task: Backgrounds and goals

1.2. Enemy images in texts from the Ancient Near East

1.4. On the book of Isaiah as object of the investigation

3.1. Images of Ephraim/Israel and Aram

3.3. Images of other neighbouring nations

4.3. Links to images of nations and empires

4.4. Named and unnamed enemies in a macrostructural perspective

5. The enemies and YHWH

5.2. Enemies as instruments in YHWH’s service

6.1. The Zion-centered perspective and the 701 paradigm

6.3. On enemy images and implied self-images