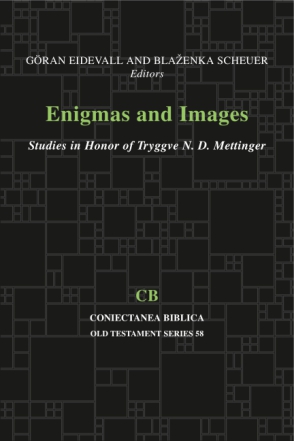 The two words “enigma” and “image” capture important aspects of Tryggve Mettinger’s profile as a biblical scholar. For those who are acquainted with his work, the choice of the latter term requires no explanation. As Tryggve emphasized in his retrospective speech, several of his books and articles relate to one overarching theme that has to do with images: the study of the biblical Gottesbild (the biblical notion of the image of God). In this connection, the word “image” refers in the first place not to pictorial representations but to mental images and social constructions, to theological concepts and literary “imagery.” However, iconography also lies within the scope of Professor Mettinger’s research, even if a predilection for “aniconic” representations is evident. This observation may provide a link to the other word that is included in the title of this book, “enigma.”

In his eagerness to understand the origins of the biblical prohibition against images, Mettinger embarked on an investigation into aniconic cult as a common trait of several Northwest Semitic cultures. Throughout his career, he has been driven by a strong curiosity about unsolved riddles, coupled with a healthy skepticism toward established theories and “truths” within the field of biblical exegesis. All contributions to this volume relate in one way or another to central themes within Mettinger’s rich work.

The essays presented here pay lively tribute to one of the pivotal figures in Old Testament studies during the past three decades.

The God of the Eden Narrative Terje Stordalen

Signs from the Garden: Some Remarks on the Relationship between Eve and Adam in Genesis 2–3* Bob Becking

The Narrative of King Solomon and the Law of the King: On the Relationship between 1 Kings 3–11 and Deut 17:14-20 Karl William Weyde

Horeb Revisited: Reflections on the Theophany in 1 Kings 19 Göran Eidevall

The Blessing God and Goddess: A Longitudinal View from Ugarit to “Yahweh and his asherah” at Kuntillet ʿAjrud Mark S. Smith

The Holy Spirit as Dove

and as Tongues of Fire: Reworking Biblical Metaphors in a Modern Danish Hymn Kirsten Nielsen