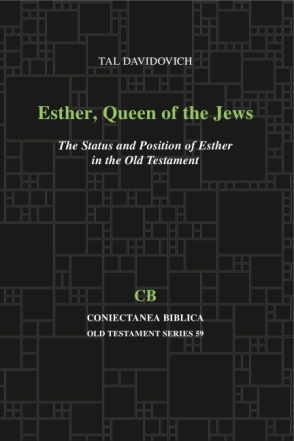 Nevertheless, in Jewish thought Esther was, is, and will always be regarded as the queen of Persia, an idea based, perhaps, on the need for security and comfort for diaspora Jews, who passed this story on to their children through the generations to give them hope even in their darkest hours. Esther’s status in Jewish thought as a Persian queen is based on the contents of the different versions of the Book of Esther and also on the Persian socio-historical background of the events described in the book.

This study includes an introduction, an examination of Esther’s character in the Book of Esther, in comparison to other royal women in the OT, and in light of the Resh Galuta, and conclusions. The study follows the evolution of Esther’s status inside and outside the royal palace and her power in comparison to other similarly placed women. Whether she was a member of the pilagshim or carried the title of Queen (of the Jews?) is a question of secondary importance. Of more importance is that Esther was indeed Resh Galuta, the one woman in Jewish history who is known to have been the Head of the Diaspora, the formal leader of all the Jews in exile.

1.5 The Achaemenid Dynasty and the Status of Royal Women: The Socio-Historical Background

1.6 The Achaemenid Kings and Their Royal Women

1.7 The different Versions of the Book of Esther

1.8 Queen Esther in Proof of History

2.3 Direct Characterizations/Descriptions of the Status of Esther as Described in the OT Book of Esther

2.4 Indirect Characterizations for the Status of Esther as Described in the OT Book of Esther

2.5 The Description of Her Life in the Palace as One of the Royal Women

3.1 The Gathering of the Girls

3.4 Esther as a Possible Chief Concubine

4. Head of the Diaspora