Royal Inscriptions of the Neo-Babylonian Empire 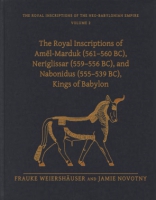