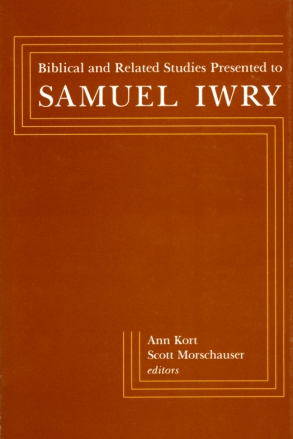 Letters of Appreciation for Prof. Iwry

Did Alexander Yannai Negotiate an Alliance with the Parthians? Moses Aberbach

The First and Second Tithes in the Temple Scroll Joseph M. Baumgarten

The Rhetoric of Psalm 145 Adele Berlin

The Murder of the Merchants Near Akko Barry M. Gittlen

Originals and Imitations in Biblical Poetry: A Comparative Examination of 1 Sam:1-10 and Ps 113:5-9 Avi Hurvitz

The Worship of Baal and Asherah: a Study in the Social Bonding Functions of Religious Systems George E. Mendenhall

Hezekiah’s Sacrifices at the Dedication Services of the Purified Temple (2 Chr 29:21-24) Jacob Milgrom

Esther Revisited: an Examination of Esther Studies over the Past Decade Carey A. Moore

Isaiah 66:1-4: Judean Sects in the Persian Period as Viewed by Trito-Isaiah Alexander Rofe

A Study of the Relationship of the Syriac Version to the Massoretic Hebrew, Targum Jonathan, and Septuagint Texts in Jeremiah 18 Leona Glidden Running