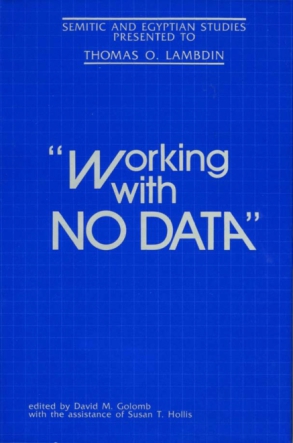 But Lambdin’s reputation derives primarily from his teaching, for his most widely used books (Introduction to Biblical Hebrew and Introduction to Classical Ethiopic) originated in the classroom. By training his students not only in the related languages but also in historical grammar and comparative semitics, he has enabled them to use comparative material with first-hand knowledge and critical awareness.

The title of this volume reflects Lambdin’s awareness that the linguist is frequently working in a field that has no previously established guidelines; the ramifications of this realization are then explored in various linguistic fields by former students and colleagues of Lambdin.

Linguistics and Philology in the Study of Ancient Near Eastern Languages - Walter R. Bodine

Mot Invites Baal to a Feast: Observations on a Difficult Ugaritic Text (CTA 5.i = KTU

Supralinear and in Palestinian Pointed Manuscripts of Hebrew and Aramaic from the Cairo Geniza - Steven E. Fassberg

The Divergence of the Egyptian Suffix Conjugation - Carleton T. Hodge

Join the Apiru or Become One? - William L. Moran

A Problem of Gemination in the Ethiopic Verbal System - H. Lee Perkins

Some Observations on the Sibilants in the Second Millennium B.C. - Lamia R. Shehadeh

The Textual Base for the Ethiopic Translation of 1 Enoch - James C. VanderKam

Bibliography of the Writings of Thomas O. Lambdin