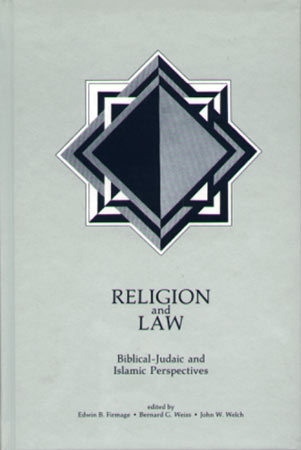 The Decalogue: Its Significance, Uniqueness, and Place in Israel’s Tradition - Moshe Weinfeld

Biblical Attitudes toward Power: Ideal and Reality in Law and Prophets - Moshe Greenberg

Ethics and Ritual: The Foundations of the Biblical Dietary Laws - Jacob Milgrom

Observations on the Ethical Foundations of the Biblical Dietary Laws: A Response to Jacob Milgrom - David P. Wright

Another Perspective on Ethics in Islamic Law and Ritual: A Response to Frederick Denny - Lois A. Giffen

Law and Grace in Islam: Sufi Attitudes toward the Sharia - Mahmoud Ayoub

Beyond the Law: The Experience of Some Persian Sufi Poets—A Response to Mahmoud Ayoub - Leonardo P. Alishan

Some Consequences of the Image Prohibition in Jewish Art - Jo Milgrom

The Role of Iconoclasm on Islamic Art and Architecture: A Response to Jo Milgrom - Stanley Ira Hallet

The Formation of the Canon of the Old Testament: The Selection and Identification of the Torah as the Supreme Authority of the Postexilic Community - David Noel Freedman

Rite: Ceremonies of Law and Treaty in the Ancient Near East - Delbert R. Hillers