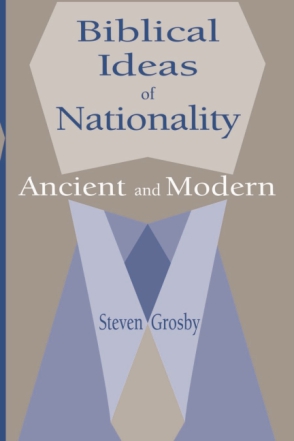 “Moreover, if we learn anything from the experience of the bellicose twentieth century, it is that we, in fact, live primarily in monolatrous societies; that modern man attributes a common kinship to those who, like himself, are born in the territory in which he was born and inhabits—to those who are “native in the land” . . . and that the god of the land and lineage, and its representatives in the “center,” continue to receive our deference, albeit in an age of monotheism, reformulated as patriotism or, when taken to ideological extremes, nationalism.’” (from the introduction)

Grosby’s forays into the application of anthropology and sociology to this area of study will be recognized as pioneering and provocative, and as pointing the way to further research on the idea of nationality in ancient times.

Religion and Nationality in Antiquity

Kinship, Territory, and the Nation in the Historiography of Ancient Israel

Sociological Implications of the Distinction between “Locality” and Extended “Territory”

The Chosen People of Ancient Israel and the Occident: Why Does Nationality Exist and Survive?

Borders, Territory, and Nationality in the Ancient Near East and Armenia

Aram Kulloh and the Worship of Hadad: A Nation of Aram?

Index of Other Sources