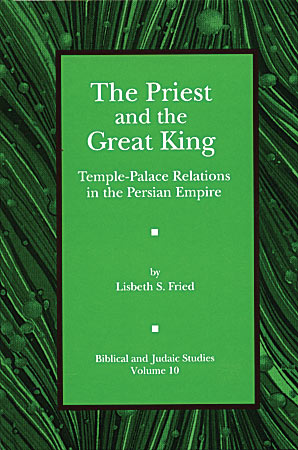 Liz added this explanatory note in an e-mail to the Biblical Studies e-mail list on December 2, 2005:

“There’s a confusion in reader’s minds about my methodology, which I’d like to set straight if I may.

“The book is a rewrite of my dissertation. My dissertation was entitled The Rise to Power of the Judean Priesthood: The Impact of the Achaemenid Empire. I assumed at the outset that because the Achaemenid Empire was non-directive, and cared only that tribute would be sent regularly, the priesthood was able to fill the resulting power vacuum and achieve secular power. My goal was to chronicle the process. In addition I thought to look at Eisenstadt’s model which predicted the opposite result—that local elites, like priests, could not rise to power in an imperial system. Since there was no real data from Judah, I looked at temple-palace relations in Babylon, Egypt, and Asia Minor as well as Judah.

“It was only during my research that I came to the conclusion that local priesthoods did not achieve secular power anywhere in the Achaemenid Empire and certainly not in Judah. In fact their power diminished during those 200 years. I also concluded, not that Eisenstadt was correct, but only that my data were insufficient to reject his model. However, my data were sufficient to reject the model of an Achaemenid Empire that was non-directive as well as the model of Persian authorization of local norms (Frei and Koch).”

Map: Cities and Islands of the Aegean Sea