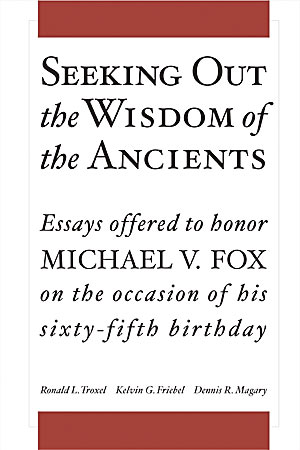 The book is organized around themes that reflect Prof. Fox’s interests and work: Part 1: “Seeking Out Wisdom and Concerned with Prophecies” (Sir 39:1): Studies in Biblical Texts”; Part 2: “Preserving the Sayings of the Famous” (Sir 39:2): Text, Versions, and Method.

Part 1 “Seeking Out Wisdom and Concerned with Prophecies” (Sirach 39:1): Studies in Biblical Texts

Observations on Ezekiel as a Book Prophet—Menahem Haran

Psalm 18 and 2 Samuel 22: Two Versions of the Same Song—Theron Young

The Wisdom of Creation in Psalm 104—Adele Berlin

“Come, O Children I Will Teach You the Fear of the Lord” (Psalm 34:12): Comparing Psalms and Proverbs—William P. Brown

A Proverb in the Mouth of a Fool—James L. Crenshaw

Genericity, Tense, and Verbal Patterns in the Sentence Literature of Proverbs—John A. Cook

Exegetical and Stylistic Analysis of a Number of Aphorisms in the Book of Proverbs: Mitigation of Monotony in Repetitions in Parallel Texts—Shamir Yona

Forming “Fearers of Yahweh”: Repetition and Contradiction as Pedagogy in Proverbs—Christine Roy Yoder

The Instruction of Amenemope and Proverbs 22:17–24:22 from the Perspective of Contemporary Research—Nili Shupak

The Woman of Valor and A Woman Large of Head: Matchmaking in the Ancient Near East—Victor Avigdor Hurowitz

The Fly and the Dog: Observations on Ideational Polarity in the Book of Qoheleth—Tova Forti

A Sense of Timing: A Neglected Aspect of Qoheleth’s Wisdom—Richard L. Schultz

The Little Sister and Solomon’s Vineyard: Song of Songs 8:8–12 as a Lovers’ Dialogue—J. Cheryl Exum

Answering Questions, Questioning Answers: The Rhetoric of Interrogatives in the Speeches of Job and His Friends—Dennis R. Magary

Part 2 “Preserving the Sayings of the Famous” (Sirach 39:2): Text, Versions, and Method

What’s in a Name? Contemporization and Toponyms in LXX-Isaiah—Ronald L. Troxel

Characterization in the Old Greek of Job—Karl V. Kutz

On the Influence of Job on Jewish Hellenistic Literature—Heidi M. Szpek

Translating Biblical Words of Wisdom into the Modern World—Leonard Greenspoon

The Text-Critical Value of the Septuagint of Proverbs—Johann Cook

Christian Aramaism: The Birth and Growth of Aramaic Scholarship in the Sixteenth Century—Stephen G. Burnett

Spying out the Land: A Report from Genology—Carol A. Newsom