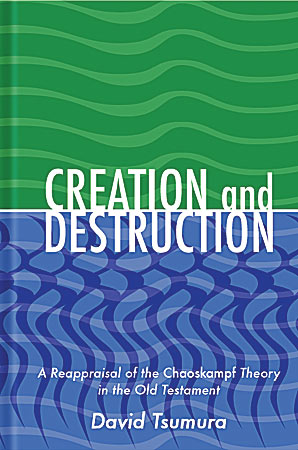 In this revised and expanded edition of the 1989 book, Tsumura carries the discussion forward. In part 1, the general thesis of the original work is restated in a significantly revised and expanded form; in the second part of this monograph, he expands the scope of his research to include a number of poetic texts outside the Primeval History, texts for which scholars often have posited an ancient Near Eastern mythological substratum. Among the questions asked are the following: What are the functions of “waters” and “flood” in biblical poetry? Do the so-called chaos dragons in the Old Testament, such as Leviathan, Rahab, and Yam, have anything to do with the creation motif in the biblical tradition? What is the relationship between these poetic texts and the Ugaritic myths of the Baal-Yam conflict? Are Psalms 18 and 29 “adaptations” of Canaanite hymns, as suggested by some scholars?

Among the conclusions that Tsumura reaches are these:

(1) The phrase tohû wabohû has nothing to do with the idea of a chaotic state of the earth.

(2) The term tehÃ´m in Gen 1:2 is a Hebrew form derived from the Proto-Semitic *tiham-, “ocean,” and it usually refers to the underground water that was overflowing and covering the entire surface of the earth in the initial state of creation.

(3) The earth-water relationship in Gen 2:5–6 is different from that in Gen 1:2. In Gen 1:2, the earth was totally under the water; in Gen 2:5–6, only a part of the earth, the land, was watered by the ’ed-water, which was overflowing from an underground source.

(4) The biblical poetic texts that are claimed to have been influenced by the Chaoskampf-motif of the ancient Near East in fact use the language of storms and floods metaphorically and have nothing to do with primordial combat.

The Earth in Genesis 1

The Waters in Genesis 1

The Earth in Genesis 2

The Waters in Genesis 2

The Earth-Waters Relationship in Genesis 2

God and the Waters

A Creation Motif in Psalm 46?

A Destruction Motif in Habakkuk 3