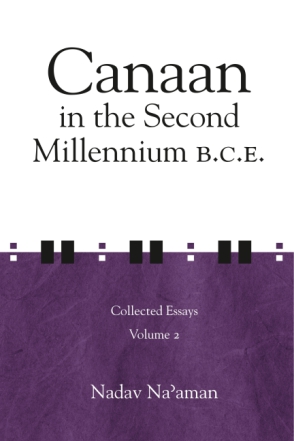 Collected here are 23 essays on the Hurrians, the Egyptians and their presence in the Levant during the second millennium B.C.E., Canaanite city-states, the Amarna Letters, and the neighbors of Canaan in the north, such as Alalakh and Damascus. The essays range over such topics as scribes and language, archaeology, cultural influences, and the interrelations of the great powers during this period. The volume includes indexes of ancient personal names, place-names, and biblical references.

1. The Hurrians and the End of the Middle Bronze Age in Palestine

4. Looking for the Pharaoh’s Judgment

5. The Origin and the Historical Background of Several Amarna Letters

7. Praises to the Pharaoh in Response to His Plans for Campaign to Canaan

8. The Canaanites and Their Land

9. Four Notes on the Size of Late Bronze Canaan

10. The Network of Canaanite Late Bronze Kingdoms and the City of Ashdod

11. Canaanite Jerusalem and Its Central Hill Country Neighbors in the Second Millennium BCE

14. Economic Aspects of the Egyptian Occupation of Canaan

15. Pharaonic Lands in the Jezreel Valley in the Late Bronze Age

16. On Gods and Scribal Traditions in the Amarna Letters

17.abiru and Hebrews: The Transfer of a Social Term to the Literary Sphere

18. The Town of Ibirta and the Relations of the ʿApiru and the Shasu

20. The Ishtar Temple at Alalakh

21. A Royal Scribe and His Scribal Products in the Alalakh IV Court

22. Literary and Topographical Notes on the Battle of Kishon (Judges 4–5)

23. The “Conquest of Canaan” in the Book of Joshua and in History