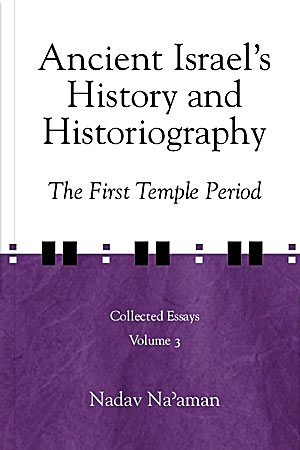 This final volume in the 3-volume set of Na’aman’s collected essays contains 29 essays. Among the topics addressed are: the sources available to Israel’s historians late in the first millennium B.C.E.; the reality behind the narratives relating to the history of the United Monarchy; the effect of the author’s own time on the composition of the histories of Saul, David, and Solomon; and the contributions of archaeology to the study of the tenth century B.C.E. In the course of covering these themes, Na’aman touches on topics such as history and historiography, textual and literary problems, historical geography, society, administration, cult, and religion.

1. The Contribution of the Amarna Letters to the Debate on Jerusalem’s Political Position in the Tenth Century BCE

2. The Kingdom of Ishbaal

3. Sources and Composition in the History of David

4. In Search of Reality behind the Account of David’s Wars with Israel’s Neighbors

8. Sources and Composition in the History of Solomon

10. Israel, Edom and Egypt in the Tenth Century BCE

11. Historical and Literary Notes on the Excavations of Tel Jezreel

12. Prophetic Stories as Sources for the Histories of Jehoshaphat and the Omrides

13. Beth-David in the Aramaic Stela from Tel Dan

14. Three Notes on the Aramaic Inscription from Tel Dan

15. King Mesha and the Foundation of the Moabite Monarchy

16. The Contribution of Royal Inscriptions for a Re-evaluation of the Book of Kings as a Historical Source

17. Royal Inscriptions and the Histories of Joash and Ahaz, Kings of Judah

18. Azariah of Judah and Jeroboam II of Israel

19. Historical and Chronological Notes on the Kingdoms of Israel and Judah in the 8th Century BCE

20. On the Antiquity of the Regnal Years in the Book of Kings

21. The Deuteronomist and Voluntary Servitude to Foreign Powers

22. The Debated Historicity of Hezekiah’s Reform in Light of Historical and Archaeological Research

24. ‘The Dedicated Treasures Buildings within the House of YHWH Where Women Weave Coverings for Asherah’ (2 Kings 23:7)

25. The Fire Signals of Lachish Revisited

27. The Law of the Altar in Deuteronomy and the Cultic Site near Shechem

28. Lebo-hamath, Subat-Hamath and the Northern Boundary of the Land of Canaan

29. Sources and Redaction in the Chronicler’s Genealogies of Asher and Ephraim