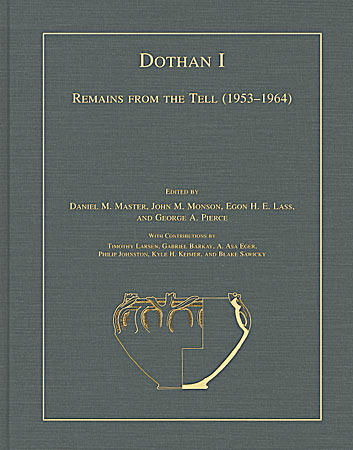 Chapters on the history of the expedition, methodology, Early Bronze Age and Late Bronze Age, the Iron Age, the Hellenistic, Roman, and Byzantine eras are complemented by studies on stone and metal artifacts, Iron II seal impressions, and Rhodian stamp seal impressions. The volume is profusely illustrated, with more than 200 photos and drawings and 2 color plates.

Volume 2 of the series will report on the Western Cemetery at Dothan, which was the source of a rich repertoire of Late Bronze Age pottery.

3. GIS Studies of Tell Dothan and the Dothan Valley George A. Pierce

5. The Neolithic and Chalcolithic Periods

12. The Roman and Byzantine Periods

Due to a technical production problem, the Greek transcriptions on pp. 173–75 were corrupted. High (1.9 Mb PDF) and low (177 kb PDF) resolution replacement pages are available for download.