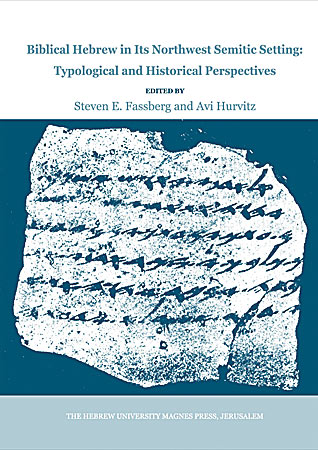 In the light of the significant advances in the study of Biblical Hebrew and Northwest Semitic in the past four decades, an international research group on the subject of Biblical Hebrew in its Northwest Semitic setting was convened at the Institute for Advanced Studies of the Hebrew University of Jerusalem during the 2001–2002 academic year. The present volume presents the fruits of this year-long collaboration.

Joshua Blau Problems of Noun Inflection in Arabic: Reflections on the Diptore Declension

John A. Emerton ‘The Kingdoms of Judah and Israel and Ancient Hebrew History Writing

John Huehnergard On the Etymology of the Hebrew Relative: she

Avi Hurvitz Continuity and Change in Biblical Hebrew: The Linguistic History of a Formulaic Idiom from the Realm of the Royal Court

Geoffrey Khan Some Aspects of the Copula in North West Semitic

M. O’Connor The Human Characters’ Names in the Ugaritic Poems: Onomastic Eccentricity in Bronze-Age West Semitic and the Name Daniel in Particular

Gary A. RendsburgIsraelian Hebrew in the Song of Songs