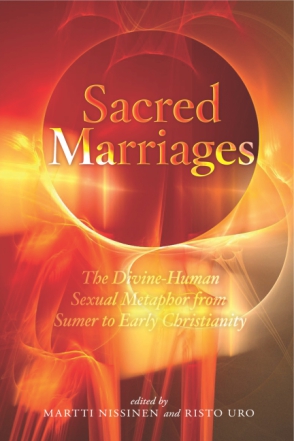 The subtitle indicates that the contributors are primarily interested in different aspects of the divine-human sexual metaphor—that is, the imagining and reenactment of a gendered relationship between the human and divine worlds. This metaphor, which is essentially about relationship rather than sexual acts, can find textual, ritual, mythical, and social expressions in different times and places.

Indeed, the sacred marriage ritual itself should be considered not a manifestation of the “sacralized power of sexuality experienced in sexual intercourse” but one way of objectifying the divine-human sexual metaphor.

Sacred Marriage and the Transfer of Divine Knowledge: Alliances between the Gods and the King in Ancient Mesopotamia Beate Pongratz-Leisten

Sacred Marriage and the Devotees of Ištar Saana Teppo

Sacred Marriage in the Ugaritic Texts? The Case of KTU/CAT 1.23 (Rituals and Myths of the Goodly Gods) Mark S. Smith

Hieros Gamos in Ancient Greek Religion: The Human Aspect of a Sacralized Ritual Aphrodite A. Avagianou

The Sons of God and the Daughters of Men John J. Collins

The Divine-Human Marriage Matrix and Constructions of Gender and “Bodies” in the Christian Bible David M. Carr and Colleen M. Conway

From the Bridegroom’s Time to the Wedding of the Lamb: Nuptial Imagery in the Canonical Gospels and the Book of Revelation Kari Syreeni

The Bride of Christ (Ephesians 5:22–33): A Problematic Wedding Carolyn Osiek

Sex and the Single Savior Dale B. Martin

Divine Desires: Fantasy and Renunciation in the Narrative of Mark’s Gospel Petri Merenlahti

Asceticism as a Sacred Marriage: An Essay on Eastern and Western Theories Richard Valantasis

The Bridal Chamber and Other Mysteries: Ritual System and Ritual Transmission in the Valentinian Movement Risto Uro

Sacred Marriage and Spiritual Knowledge: Relations between Carnality and Salvation in the Apocryphon of John Ingvild Sælid Gilhus

The Sumerian Sacred Marriage in the Light of Comparative Evidence