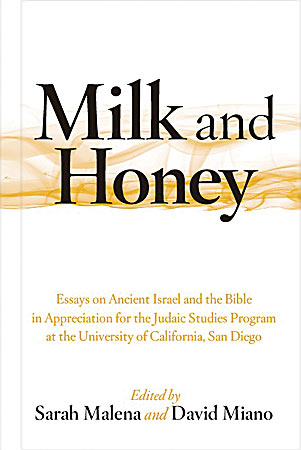 In a very short stretch of years, the Judaic Studies Program at the University of California, San Diego, has developed into one of the most important centers for teaching and research in biblical studies, in ancient Near Eastern and biblical archaeology, and more generally in Judaic studies. The program now rivals far older centers of study in these fields in eastern research universities. I have been an admirer of the program for some years, proud of former students of mine whose energy and foresight have contributed to the developments in La Jolla, including the establishment of endowed chairs that guarantee the future of this center and its program.

This collection of essays honoring the Judaic Studies Program and its faculty is a testimony to the fecundity of the program in producing scholars, whose essays dominate the collection. Several essays come from other scholars whose home base is in the West and who have engaged in colloquia and common pursuits with the San Diego faculty. . . . There are sections on Genesis, poetry and prophecy, narrative and history, lexicon, archaeology, and (not least) paleography.

The Judaic Studies Program at UCSD: A History Sarah Malena and David Miano

A Goddess in the Garden? The Fall of Eve Shawna Dolansky

Jacob’s Bargain with God (Genesis 28:20–22) and Its Implications for the Documentary Hypothesis Jeffrey C. Geoghegan

Do Not Interpretations Belong to God? A Narrative Assessment of Genesis 40 as It Elucidates the Persona of Joseph Miriam Sherman

The Good Book and the Bad Movies: Moses and the Failure of Biblical Cinema Michael M. Homan

What Happened in the Fourteenth Year of Hezekiah? A Historical Analysis of 2 Kings 18–20 in the Light of New Textual Considerations David Miano

Where Is God? Divine Presence in the Absence of the Temple Risa Levitt Kohn and Rebecca Moore

Spice Roots in the Song of Songs Sarah Malena

The Participle in Biblical Hebrew and the Overlap of Grammar and Lexicon Francis I. Andersen and A. Dean Forbes

From the Wilderness of Zin alongside Edom: Edomite Territory in the Eastern Negev during the Eighth–Sixth Centuries B.C.E. Laura M. Zucconi

The Gamla Coin: A New Perspective on the Circumstances and Date of Its Minting Yoav Arbel

Due to a technical production problem, the map on p. 221 was printed at the wrong resolution, obscuring most of the page. A replacement page is available here for download.