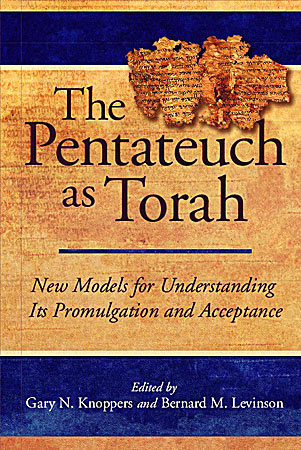 How, When, Where, and Why Did the Pentateuch Become the Torah? Gary N. Knoppers and Bernard M. Levinson

The Persian Imperial Authorization as a Historical Problem and as a Biblical Construct: A Plea for Distinctions in the Current Debate Konrad Schmid

Local Law in an Imperial Context: The Role of Torah in the (Imagined) Persian Period Anselm C. Hagedorn

Temple and Torah: Reflections on the Legal Status of the Pentateuch between Elephantine and Qumran Reinhard G. Kratz

The Pentateuch in Ancient Mediterranean Context: The Publication of Local Lawcodes Gary N. Knoppers and Paul B. Harvey, Jr.

From History Writing to Library Building: The End of History and the Birth of the Book Jean-Louis Ska

Scribal Scholarship in the Formation of Torah and Prophets: A Postexilic Scribal Debate between Priestly Scholarship and Literary Prophecy— The Example of the Book of Jeremiah and Its Relation to the Pentateuch Eckart Otto

Part 3. The Torah as a Foundational Document in Judah and Samaria

The Torah between Samaria and Judah: Shechem and Gerizim in Deuteronomy and Joshua Christophe Nihan

The “Publication” of Legal Texts in Ancient Judah Joachim Schaper

The Samaritans and Their Pentateuch Reinhard Pummer

Part 4. The Translation, Interpretation, and Application of the Torah in Early Jewish Literature

The Second Temple and the Legal Status of the Torah: The Hermeneutics of the Torah in the Books of Ruth and Ezra Sebastian Grätz

The Use of the Pentateuch in the Temple Scroll and the Damascus Document in the Second Century B.C.E. Sidnie White Crawford

The Torah as the Rhetoric of Priesthood James W. Watts