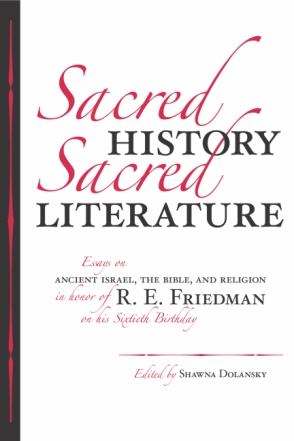 The essays in this volume reflect the breadth and depth of Richard Friedman’s life and work. Several contributors discuss topics related to the Hebrew Bible: for example, Jacob Milgrom examines the relationship between Ezekiel and the Levites and Carol Meyers discusses the Tabernacle texts in the context of Priestly influence on them; Ronald Hendel, Michael Homan, and Robert Wilson explore the history of source criticism, with detailed source-critical analysis of Genesis 1–11 and the book of Kings. Jeffrey Geoghegan discusses the origins of the Passover in one of several insightful essays under the topic “Israel and the Ancient Near East.” Among the contributions specific to archaeology, Baruch Halpern’s provides a provocative “Defense of Forgery.” Lastly, four contributors (e.g., Alan Cooper) discuss religion and religious studies, along with ramifications for contemporary application. A fine collection of contemporary topics discussed by leading scholars in the field.

Ezekiel and the Levites Jacob Milgrom

A Tale of the Prophet and the Courtier: A Responsive Reading of the Nathan Texts Herbert Huffmon

Empirical Taxonomy and the Hebrew Bible A. Dean Forbes

How Moses Gained and Lost the Reputation of Being the Torah’s Author: Higher Criticism Prior to Julius Wellhausen Michael M. Homan

How Was the Bible Written? Reflections on Sources and Authors in the Book of Kings Robert Wilson

Israel and the Ancient Near East

Abraham and Damascus in Some Greek and Latin Texts of the Hellenistic Period John A. Emerton

Rethinking Sectarian Judaism: The Centrality of the Priesthood in the Second Temple Period Risa Levitt Kohn and Rebecca Moore

The Bible and Archaeology

In Defense of Forgery Baruch Halpern

Can Archaeology Serve as a Tool in Textual Criticism of the Hebrew Bible? William G. Dever

“You Shall Make for Yourself No Molten Gods”: Some Thoughts on Archaeology and Edomite Ethnic Identity Thomas E. Levy

Starving the Patient: A Jewish Perspective on Terry Schiavo and the Feeding Tube Controversy Randy Sturman