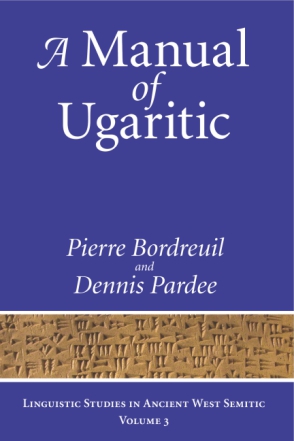 The book includes a historical introduction to the texts and language, the book includes a sketch of the grammar of Ugaritic, a bibliography, facsimiles (hand-copies) of a number of texts, and a glossary and text concordance—in short, everything that a student needs for entrée into the language. On the CD, in addition to the PDF, color photos of all of the texts included in the book are provided. The hyperlinks to the PDF enable the reader to move easily from the discussion in the grammar to a copy of a text to the color photo of the text and back again, making the material much more accessible and usable for students and researchers.

Pierre Bordreuil inaugurated a chair in Ugaritic at the écoles des langues et civilisations orientales at the Institut catholique de Paris. Dennis Pardee teaches in the Dept. of Near Eastern Languages and Civilizations at the Oriental Institute of the University of Chicago.

Preface to the English Edition

Foreword, Including a Description of the Intended Audience

1. Introduction to the History and Culture of Ugarit