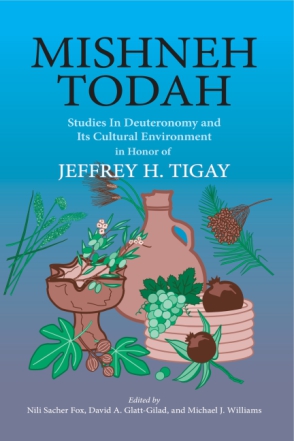 The volume is arranged according to Professor Tigay’s primary topics of interest: deuteronomic studies, ancient Israelite religion and its Near Eastern context, and ancient Israelite literary tradition. The reader will enjoy diverse studies such as “Gender Transformation and Transgression: Contextualizing the Prohibition of Cross-dressing in Deuteronomy 22:5,” “The Problem of Evil in the Book of Job,” and “Linen and the Linguistic Dating of P” and will value the erudition of scholars such as Moshe Greenberg, Emanuel Tov, Gary Rendsburg, William Hallo, and Baruch Levine.

In the customary appreciations and throughout the volume, colleagues, students, and friends laud Professor Tigay’s intellectual tenacity, relational warmth, pedagogical prowess, and devotion to Torah. A former student aptly speaks for those who know him best: “A scholar’s immortality lies in his or her work. It rests too in his or her students and in the respect won from his or her colleagues. A Festschrift like this one for Jeff Tigay is merely a token of that legacy, the acknowledgment by his students and colleagues that the work is indeed worth celebrating.” This legacy will surely be a boon and delight to the reader.

A Colleague’s Appreciation by David Stern

Bibliography of the Publications of Jeffrey H. Tigay

1) Michael Carasik A Deuteronomic Voice in the Joseph Story

2) Emanuel Tov Textual Harmonizations in the Ancient Texts of Deuteronomy

3) Baruch J. Schwartz The Visit of Jethro: A Case of Chronological Displacement

4) Barry L. Eichler Examples of Restatement in the Laws of Hammurabi

7) Adele Berlin Sex and the Single Girl in Deuteronomy 22

9) Yair Zakovitch ‘My Father Was a Wandering Aramean’ (Deuteronomy 26:5) or ‘Edom Served My Father’?

11) Richard C. Steiner and S. Z. Leiman The Lost Meaning of Deuteronomy 33:2 as Preserved in the Palestinian Targum to Exodus 20:2

13) David A. Glatt-Gilad Revealed and Concealed: The Status of the Law (Book) of Moses within the Deuteronomistic History

14) Ziony Zevit Deuteronomy in the Temple: An Exercise in Historical Imagining

II. Ancient Israelite Religion and Its Near Eastern Context

18) William W. Hallo One God for Many: Philological Glosses on Monotheism

19) Victor (A.) Hurowitz The Divinity of Mankind in the Bible and the Ancient Near East: A New Mesopotamian Parallel

20) Israel Knohl Does God Deceive? An Examination of the Dark Side of Isaiah’s Prophecy

24) Edward L. Greenstein The Problem of Evil in the Book of Job

25) Mordechai Cogan Literary-Critical Issues in the Hebrew Bible from an Assyriological Perspective: Additions and Omissions

27) Chaim Cohen The Ancient Critical Misunderstanding of Exodus 21:22-25 and Its Implications for the Current Debate on Abortion

28) Frederick W. Knobloch Linen and the Linguistic Dating of P

30) Baruch A. Levine The Four Private Persons Who Lost Their Share in the World to Come: The Judgment of m. Sanh:2