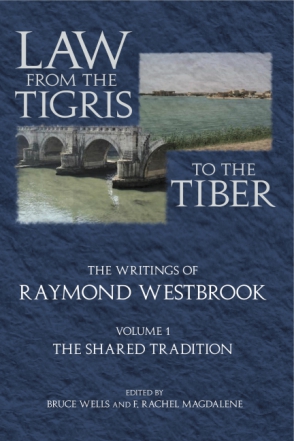 Volume One: The Shared Tradition

Part One: The Tradition in the Law Codes

2. The Nature and Origins of the Twelve Tables

3. Cuneiform Law Codes and the Origins of Legislation

4. What Is the Covenant Code?

6. Codex Hammurabi and the Ends of the Earth

7. Social Justice in the Ancient Near East

8. Slave and Master in Ancient Near Eastern Law

9. Patronage in the Ancient Near East

10. Adultery in Ancient Near Eastern Law

11. Witchcraft and the Law in the Ancient Near East

12. The Trial Scene in the Iliad

14. The Coherence of the Lex Aquilia

15. Restrictions on Alienation of Property in Early Roman Law

1. The Edict of Tudhaliya IV

3. The Liability of an Innocent Purchaser of Stolen Goods in Early Mesopotamian Law

5. The Phrase ‘His Heart Is Satisfied’ in Ancient Near Eastern Legal Sources

9. The Adoption Laws of Codex Hammurabi

12. The Quality of Freedom in Neo-Babylonian Manumissions

13. Judges in the Cuneiform Sources

16. The Enforcement of Morals in Mesopotamian Law

17. A Matter of Life and Death

18. International Law in the Amarna Age

19. Babylonian Diplomacy in the Amarna Letters

21. The Laws of Biblical Israel

25. The Prohibition on Restoration of Marriage in Deuteronomy 24:1-4

27. The Trial of Jeremiah