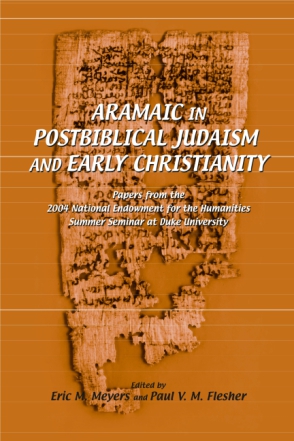 In Syria and northern Mesopotamia, Aramaic also developed into an important local language called Syriac. As Christianity began to grow, especially after its legalization under Constantine in the fourth century, Syriac took on a new role. While most Christians in the Mediterranean world adopted Latin and/or Greek for religious purposes, those in Syria used Syriac, and it played a major role in the formation of Christianity in the lands nearest its origins during its first millennium. The churches translated Scripture into Syriac, as well as using the language for commentaries, sermons, and liturgical works.

The essays in this fine volume came into being during a six-week residential seminar in the summer of 2004 held at Duke University and directed by the editors. The seminar focused on Aramaic in postbiblical Judaism and early Christianity and was sponsored by the National Endowment for the Humanities. The important essays included here were written as a result of that seminar. Most were written in residence, and all were done in discussion with the seminar’s participants and stellar faculty, which in addition to Eric Meyers and Paul Flesher included Lucas Van Rompay, Michael Sokoloff, Douglas Gropp, Tina Shepardson, and Hayim Lapin. The essays are arranged in engaging three sections: Awakening Sleeping Texts, the Details of Language, and Recasting: Making Old Texts New.

The Composition of the Qenneshrê Fragment Michael Penn

Dating by Destruction: A Date Formula at Nabratein and Zoar Eric M. Meyers

When? “After the Destruction of the Temple” Paul V.M. Flesher

The Details of Language

Tracing the History of a Legal Term of Art: The Word Azarah in Biblical, Tannaitic, and Targumic Literature Madeline Kochen

Translating the Hebrew particle ky ‘m into Aramaic and English: An Exploration through the Targums and the Peshitta Blane W. Conklin

The Usage of the First Person in the Genesis Apocryphon Stephen A. Reed

Hapax legomena and the Development of Proto-Onqelos: The Case of Genesis Kyong-Jin Lee

The Wisdom of the Sages: The Rabbinic Rewriting of Targum Qohelet Paul V. M. Flesher