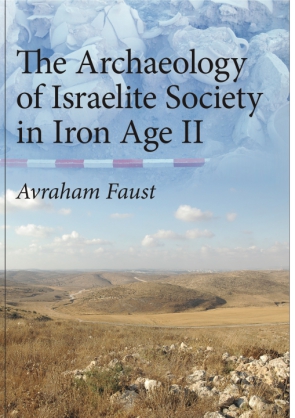 Lack of discussion of social questions has characterized the archaeology of the land of Israel for some time, even though around the world these questions constitute an important component of archaeological research (see, for instance, the work of Renfrew, Flannery, Gibbon, Blanton, Dark, Bahn, Hodder, Trigger, and many others).

The Archaeology of Israelite Society in Iron Age II fills this gap and analyzes the structure of society in the ancient kingdoms of Israel and Judah from an archaeological viewpoint. It also applies models and theories from the field of social and cognitive archaeology, using the tools of various social-science disciplines (anthropology, sociology, economics, geography, and so on).

Due to his ability to use what is probably the largest archaeological data set in the world—hundreds of planned excavations, thousands of salvage excavations, and extensive surveys, all from the small region that was ancient Israel—Avi Faust contributes not only to the study of ancient Israelite society but to the most fundamental questions about ancient societies. These questions include the identification of socioeconomic stratification in the archaeological record, the study of family and community organization, the significance of pottery, small finds and architecture as indicators of wealth, and more.

This groundbreaking monograph is one of the first attempts at a large-scale study of Israelite society based primarily on the archaeological evidence.

The following acknowledgments were inadvertently omitted from the front matter of the volume:

The Institute of Archaeology, the Hebrew University: figures 40, 41

Chapter 5: Fortified Structures in the Countryside: Between Military and Administration

Chapter 6: Political Organization in the Kingdoms of Israel and Judah

Chapter 8: Pots and Peoples: Ethnic Groups in the Kingdom of Israel

Chapter 9: From Hamlets to Monarchy: Israelite Society from the Settlement Period to the End of the Period of the Monarchy