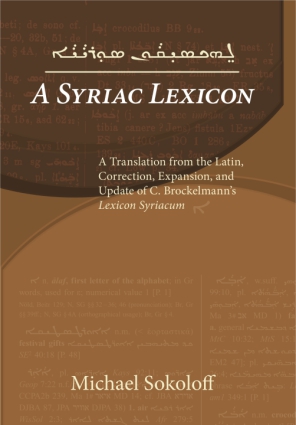 In the 81 years that have passed since the book’s publication, there have been great advances in both Aramaic and Semitic studies. Moreover, Syriac studies—especially the publication of the critical texts of classical authors, such as Ephrem—have greatly enhanced our knowledge of Syriac and have made the publication of a new and up-to-date dictionary imperative. However, because a new dictionary project does not yet exist and would take decades to complete, this edition of Brockelmann’s work has been undertaken to make Syriac vocabulary more accessible to both scholars and students. Following are the changes introduced into the Syriac Lexicon in this revision:

•The meanings are given in English, not Latin.

•The vocabulary is ordered alphabetically.

•All text citations have been verified by consulting the original publications, and where new critical editions have appeared (for example, those of E. Beck for the works of Ephrem), references have been changed to point to the new editions.

•Text citations with partial or complete translations have now been provided.

•All of the etymologies have been thoroughly revised.

•Two electronic indexes (English-Syriac and Text References) have been prepared.

This dictionary is an essential tool for anyone working in Syriac studies, Semitic linguistics, and biblical studies.

Those of you who purchased the first printing can download the corrections in the second printing here. The variant orthographies additions are located here.