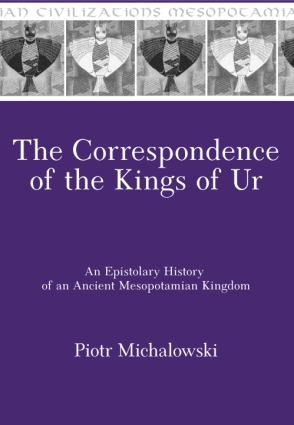 The edition is accompanied by an extensive analysis of the place of the letters in early second-millennium schooling, treating the letters as literature, followed by chapters that contextualize the epistolary material within historical and historiographic contexts, utilizing many Sumerian archival, literary, and historical sources. The main objective here is to try to navigate the complex issues of authenticity, authority, and fiction that arise from the study of these literary artifacts. In addition, Michalowski offers new hypotheses about many aspects of late third-millennium history, including essays on military history and strategy, on frontiers, on the nature and putative character of nomadism at the time, as well as a long chapter on the role of a people designated as Amorites.

The included DVD includes various photographs at high resolution of most of the tablets included in the study.

Part 1: The Royal Correspondence of the Ur III Kings in Literary and Historical Perspective

3. The Royal Letters in their Literary Setting

5. The Amorites of Ur III Times

6. The Royal Letters in their Historical Setting 2: Great Walls, Amorites, and Military History: The Puzur-Šulgi and Šarrum-bani Correspondence (Letters 13-14 and 19-20)

7. The Royal Letters in their Historical Setting 3: Ur, Isin, Kazallu and the Final Decades of the Ur III State (Letters 21-24)

Appendix A: The Reading of the Name of the Grand Vizier