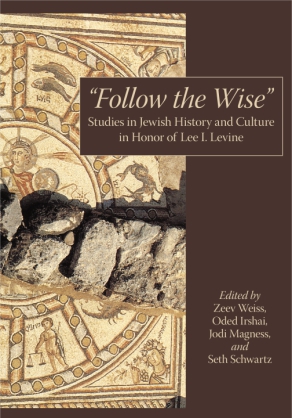 Levine was instrumental in founding and developing the TALI (an acronym for Tigbur Limudei Yahadut, Enriched Jewish Studies) track of Israel’s state school system. He was also a founding member of the Seminary of Judaic Studies in Jerusalem (now known as the Schechter Institute for Jewish Studies), which opened its doors in 1984. In addition to teaching, Lee headed the Schechter Institute (first as dean and then as president) from 1987 to 1994. Lee was an active member of the Masorti Movement in Israel and represented it abroad as Director of the Foundation for Masorti Judaism (1986–87) and Vice-Chancellor of Israel Affairs at the Jewish Theological Seminary (1987–94).

The honoree has published 12 monographs, 11 edited or coedited volumes, and 180 articles. His scholarship encompasses a broad range of topics relating to ancient Judaism, especially archaeology, rabbinic studies, and Jewish history. Within these disciplines he has dealt with a variety of subfields, including ancient synagogues and liturgy, ancient Jewish art, Galilee, Jerusalem, Hellenism and Judaism, and the historical geography of ancient Palestine. He is one of the first major scholars to draw on and integrate data from all of these fields in order to afford a better understanding of ancient Judaism. The 32 contributions to this volume by 35 authors are a tribute to his influence on this field of study and reflect the broad spectrum of his own interests. The 26 English and 6 Hebrew essays are divided into sections on Hellenism, Christianity, and Judaism; art and archaeology—Jerusalem and Galilee; rabbis; the ancient synagogue; sages and patriarchs; and archaeology, art, and historical geography.

Biography of Lee I. Levine

Publications of Lee I. Levine

The Name of the Ruse: The Toss of a Ring to Save Life and Honor Shaye J. D. Cohen

Jesus and the Galilean Am ha-Aretz: A Reconsideration of an Old Problem Sean Freyne

The Bishops of Sepphoris: Christianity and Synagogue Iconography in the Late Fourth and Early Fifth Centuries Hillel I. Newman

The Observance of Ritual Purity after 70 c.e.: A Reevaluation of the Evidence in Light of Recent Archaeological Discoveries David Amit and Yonatan Adler

The Hippo-Stadium/Amphitheater in Jerusalem Amos Kloner and Sherry Whetstone

An “Encore” on the Bar Kochba Tetradrachm: A Re-vision of Interpretation Elisheva Revel-Neher

Rabbis, Preachers, and Aggadists: An Aspect of Jewish Culture in Third- and Fourth-Century Palestine David Levine

The Religious Orientation of Non-Rabbis in Second-Century Palestine: A Rabbinic Perspective Adiel Schremer

Sinai—Mountain and Desert: The Desert Geography and Theology of the Rabbis and Desert Fathers Joshua Schwartz

The Dura-Europos Synagogue Wall Paintings: A Question of Origin and Interpretation Rachel Hachlili

Priests and Purity in the Dura-Europos Synagogue Jodi Magness

The Problem of the Scarcity of Synagogues from 70 to ca c.e.: The Case of Synagogue 1 at Nabratein (2nd–3rd Century c.e.) Eric M. Meyers

Epistles of the Patriarchs in Talmudic Literature Isaiah Gafni

The Zodiac and Helios in the Synagogue: Between Paganism and Christianity Rina Talgam

Was King Herod Indeed a Megalomaniac? In Light of Kasher and Witztum’s New Book, King Herod: A Persecuted Persecutor—Ehud Netzer

Is “Bezer in the Wilderness” (Deut 4:43) Bozrah (Bostra, Roman Arabia)?On the Intricacies of a Rabbinic Tradition Oded Irshai