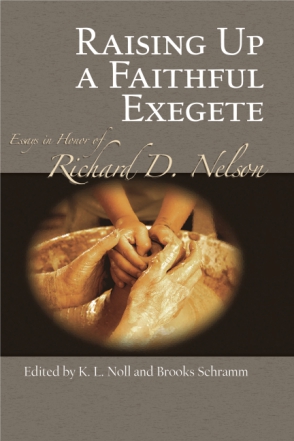 “For eleven years, I had the distinct pleasure and honor of having Richard Nelson as a senior faculty colleague. He has served as a fine model of what it means to be a dynamic and innovative teacher, an insightful mentor, a world-class scholar, a supportive friend, a dedicated leader in the church, and a person who takes sheer delight in all facets of his calling.”—Richard P. Carlson, Lutheran Theological Seminary, Gettysburg, PA

“Rich Nelson is a truly rare breed of man. He is not only a passionate and respected scholar, thoroughly trained and representative of historical-critical approaches to the Hebrew Bible. But he is also open and interested in the whole spectrum of different ways in which the Bible is read and understood both in the church and the academy. He is a remarkable role-model.”—Roy L. Heller, Perkins School of Theology, Southern Methodist University, Dallas

“Rich Nelson was one of the best graduate students I ever taught. In a seemingly effortless manner, he did basic, significant research that provided the grounds for a major but to that point generally undeveloped reading of the Deuteronomistic History. Out of that early study and his later scholarly work, he has rightly become one of our leading interpreters of Deuteronomy and the history that evolved out of its circle.”—Patrick D. Miller, Jr., Princeton Theological Seminary

“I Still Can’t Believe It”: A Brief Biography of Richard D. Nelson

Prophetic Madness: Prophecy and Ecstasy in the Ancient Near East and in Greece Martti Nissinen

The Deuteronomic History and the Book of Chronicles: Scribal Works in an Oral World Raymond F. Person Jr.

A Portrait of the Deuteronomistic Historian at Work? K. L. Noll

Joshua in the Book of Joshua Thomas B. Dozeman

Synoptic David: The View from Chronicles A. Graeme Auld

“Rest All Around from All His Enemies” (2 Samuel 7:1b): The Occasion for David’s Offer to Build a Temple Timothy M. Willis

Why Did David Stay Home? An Exegetical Study of 2 Samuel 11:1 Steven L. McKenzie

David, the Great King, King of the Four Quarters: Structure and Signification in the Catalog of David’s Conquests (2 Samuel 8:1–14, 1 Chronicles 18:1–13) Cynthia Edenburg

Part 2: The Bible, Theology, and the Christian Community

The Self-Limiting God of the Old Testament and Issues of Violence Terence E. Fretheim

Wisdom Influence in the Book of Deuteronomy Jack R. Lundbom

A Simple Matter of Numbering? “Sovereignty” and “Holiness” in the Decalogue Tradition Rodney R. Hutton

What Is Abimelek Doing in Judges? Roy L. Heller

The Rescue of Jerusalem from the Assyrians in 701 b.c.e. by the Cushites Alice Ogden Bellis

Woe or Ho: The Lamentable Translation of הוי in Isaiah 55:1 Marty E. Stevens

Tested at the Boundary: Deuteronomy and Matthew in Conversation on Testing Robert L. Foster

Whose Faith? Reexamining the Habakkuk 2:4 Citation within the Communicative Act of Romans 1:1–17 Richard P. Carlson

The Lord’s Supper as a Meal of Siblings Walter F. Taylor Jr.