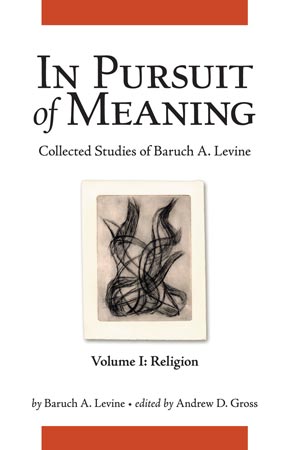 The flavor of Prof. Levine’s work is captured in this paragraph from his introduction to these two volumes:

“Looking back, and reviewing my writings, I realize what it is that I have been seeking all along. I have been in pursuit of meaning, employing scholarly methods, primarily philology and semantics, to the exegesis of ancient Near Eastern texts, preserved in several languages, principally the Hebrew Bible. I regard language as the key to meaning. This conclusion would appear to be self-evident, and yet, philology is often sidelined in favor of engaging larger frameworks. Most of all, I challenge the notion that we already know the meaning of the words and clauses central to the texts under investigation, and may proceed directly to other considerations without first re-examining the smaller units. Again and again, that policy has resulted in flawed interpretation, and in missed opportunities for learning. This is not to say that scholars should stop at the smaller units, and, indeed, the tendency to do so has been largely responsible for the reaction against Semitic philology so noticeable since the latter part of the 20th century. It is our challenge to move outward from focal points to the circumference, from text to context, from content to structure.”

A. History of Religions

The Next Phase in Jewish Religion: The Land of Israel as Sacred Space

B. Sources on Religion

The Descriptive Tabernacle Texts of the Pentateuch

Toward an Institutional Overview of Public Ritual at Ugarit

Review of The Israelian Heritage of Judaism

Leviticus: Its Literary History and Location in Biblical Literature

The Temple Scroll: Aspects of its Historical Provenance and Literary Character

A Further Look at the Moʿadim of the Temple Scroll

On the Presence of God in Biblical Religion

Ritual as Symbol: Modes of Sacrifice in Israelite Religion

The Language of Holiness: Perceptions of the Sacred in the Hebrew Bible

Silence, Sound, and the Phenomenology of Mourning in Biblical Israel

The Place of Jonah in the History of Biblical Ideas

René Girard on Job: The Question of the Scapegoat

The Four Private Persons Who Lost Their Share in the World to Come: The Judgment of m. Sanh:2

In Praise of the Israelite Mišpāḥâ: Legal Themes in the Book of Ruth

On the Origins of the Aramaic Legal Formulary at Elephantine

On the Role of Aramaic in Transmitting Syro-Mesopotamian Legal Institutions

mulūgu/melûg: The Origins of a Talmudic Legal Institution

On the Semantics of Land Tenure in Biblical Literature: The Term ʾaḥuzzāh

The Clan-Based Economy of Biblical Israel

Some Indices of Israelite Ethnicity

‘Seed’ versus ‘Womb’: Expressions of Male Dominance in Biblical Israel

The Biblical “Town” as Reality and Typology: Evaluating Biblical References to Towns and Their Functions

The View from Jerusalem: Biblical Responses to the Babylonian Presence

The CAD and Biblical Hebrew Lexicography: The Role of Akkadian Cognates

The Semantics of Loss: Two Exercises in Biblical Hebrew Lexicography

The Language of the Magical Bowls

From the Aramaic Enoch Fragments: The Semantics of Cosmography

Lexicographical and Grammatical Notes on the Palmyrene Aramaic Texts