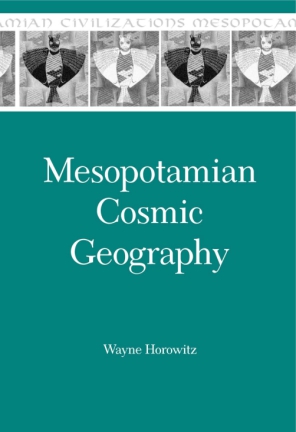 Horowitz first surveys the various sources for Mesopotamian cosmic geography, including various mythological and literary texts, as well as the famous “Babylonian Map of the World” and various astrological and astronomical texts. The universe was built by the gods in earliest times and was thought to be held together by cosmic bonds. Given this general notion, there is nevertheless significant variety in the inclusion or omission of various elements of the picture in texts of different genres and from different periods. In addition, the available evidence leaves a number of problems unsolved. What are the bounds of the universe? What is beyond the limits of the universe? In the second section of the book, Horowitz then discusses each of the various regions and their names in various locales and time periods, drawing on the disparate sources to show where there is coherence and where there is difference of perspective. In addition, he discusses all of the names for the different parts of the universe and examines the geographies of each region.

Of importance for both Assyriologists and those interested in the history of ideas, particularly the cosmologies of the ancient Near East.

2. ‘The Babylonian Map of the World’

3. The Flights of Etana and the Eagle into the Heavens

5. Gilgamesh and the Distant Reaches of the Earth’s Surface

6. Cosmic Geography in Accounts of Creation

7. The Geography of the Sky: The ‘Astrolables,’ Mul-Apin, and Related Texts

8. BagM. Beih no and the Compass Points

Part II: The Regions of the Universe

11. The Geography of the Heavens

13. The Geography of Earth

For purchasers of the 1998 edition of this book, download a list of changes and addenda that are included in the 2011 printing here.