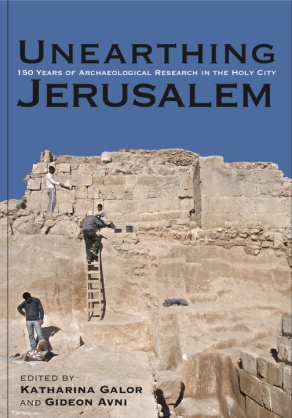 In 2006, some two dozen contemporary archaeologists and historians met at Brown University, in Providence RI, to present papers and illustrations marking the 150th anniversary of modern archaeological exploration of the Holy City. The papers from that conference are published here, presented in 5 major sections: (1) The History of Research, (2) From Early Humans to the Iron Age, (3) The Roman Period, (4) The Byzantine Period, and (5) The Early Islamic and Medieval Periods. The volume is heavily illustrated with materials from historical archives as well as from contemporary excavations. It provides a helpful and informative introduction to the history of the various national and religious organizations that have sponsored excavations in the Holy Land and Jerusalem in particular, as well as a summary of the current status of excavations in Jerusalem.

Part 1: The History of Research

British Archaeological Work in Jerusalem between 1865 and 1967: An Assessment Shimon Gibson

The American Archaeological Presence in Jerusalem: Through the Gates of the Albright Institute Joan R. Branham

The Archaeology of Jerusalem and the Franciscans of the Studium Biblicum Michele Piccirillo?†

The Departments of Antiquities and the Israel Antiquities Authority (1918–2006): The Jerusalem Experience Jon Seligman

Part 2: From Early Humans to the Iron Age

Jerusalem in the Iron Age: Archaeology and Text; Reality and Myth Israel Finkelstein

The Location of the Second Temple and the Layout of its Courts, Gates and Chambers: A New Proposal Joseph Patrich

Has the Adiabene Royal Family “Palace” Been Found in the City of David? Doron Ben-Ami and Yana Tchekhanovets

Coins from Excavations in the Domestic Quarter of the City of David, Jerusalem Donald T. Ariel

Aelia Capitolina: A Review of Some Current Debates about Hadrianic Jerusalem Jodi Magness

The Hinterland of Jerusalem during the Byzantine Period Jon Seligman

From Hagia Polis to Al-Quds: The Byzantine–Islamic Transition in Jerusalem Gideon Avni

Jerusalem and the Beginnings of the Islamic City Donald Whitcomb