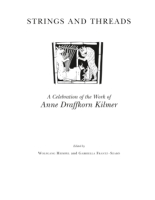 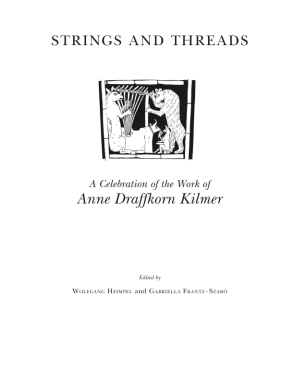 In this volume, the essays presented in her honor focus on many of Prof. Kilmer’s primary interests. The contributions are divided into two sections, reflecting the title, “Strings and Threads.” The “strings” portion of the volume collects essays that follow her interest in musicology and related matters, especially “music archaeology.” It is well known that she studied ancient Hurrian, Mesopotamian, and Ugaritic texts containing musical notations and/or songs, and has been at the forefront of decipherment and explanation of these texts. And a number of essays in this volume address various aspects of ancient music, whether it be the lyrics of the songs or the pictorial representation of music-making or the language in which music is described. In the “threads” portion of the volume are collected essays on various aspects of Mesopotamian narrative literature, an area to which Anne contributed significant insight on the structure of compositions and verbal wordplay used by ancient authors. A number of the articles in the volume follow up on or parallel Prof. Kilmer’s work in this area.

Jerrold S. Cooper Puns and Prebends: The Tale of Enlil and Namzitara

John Curtis Franklin “Sweet Psalmist of Israel”: The Kinnôr and Royal Ideology in the United Monarchy

Ellen Hickmann Music Archaeology as a Field of Interdisciplinary Research

Scott B. Noegel “Wordplay” in the Song of Erra

Denise Schmandt-Besserat Spirits and Demons of All Times

David Stronach A Pipes Player and a Lyre Player: Notes on Three Achaemenid or Near-Achaemenid

Silver Rhyta Found in the Vicinity of Erebuni, Armenia

Richard L. Zettler Banqueting and Music: An Early Dynastic I Sealing from Nippur