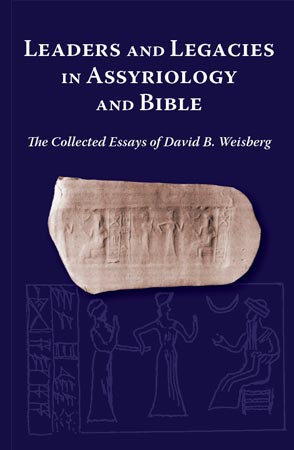 Weisberg’s oeuvre, as exemplified by the nearly three dozen essays conveniently assembled in this volume, attest both to his prodigious industriousness and to the loss that the field of Assyriology has suffered in his untimely demise. As is clear from the Table of Contents, he continued to make major contributions to the study of the Neo-Babylonian period (especially regarding political and military history and the doings of ancient royals) but he also offered seminal insights in other areas, including Masoretic studies, rabbinics, social and economic life of the ancient Near East, as well as the interface between modern culture and study of the ancient world.

—Based on W. W. Hallo’s “Introduction”

Loyalty and Death: Some Ancient Near Eastern Metaphors

Zabaya, an Early King of the Larsa Dynasty Rib-Hadda’s Urgent Tone: A Note on EA 74:50

The Length of the Reign of Hallusu-Insusinak

Esarhaddon and Egypt: A Preliminary Investigation

A Sale of Property from the Time of Esarhaddon, “King of Lands”

The “Antiquarian” Interests of the Neo-Babylonian Kings

Royal Women of the Neo-Babylonian Period

A “Dinner at the Palace” during Nebuchadnezzar’s Reign

Polytheism and Politics: Some Comments on Nabonidus’ Foreign Policy

The Impact of Assyriology on Biblical Studies

A Guided Tour through Babylonian History: Cuneiform Inscriptions in the Cincinnati Art Museum

Wool and Linen Material in Texts from the Time of Nebuchadnezzar

Character Development in the Book of Ruth

The Rare Accents of the Twenty-One Books

“Break in the Middle of a Verse”: Some Observations on a Massoretic Feature

Some Observations on Late Babylonian Texts and Rabbinic Literature

Visibility of the New Moon in Cuneiform and Rabbinic Sources [Ben Zion Wacholder and David B. Weisberg]

“Feet of Iron” in the Babylonian Talmud? [Israel O. Lehman and David B. Weisberg ]

Everyday Life in the Neo-Babylonian Period: The Integration of Material and Non-Material Culture*

Ancient Near Eastern Texts and the Study of the Bible

Delitzsch in Context [Bill T. Arnold and David B. Weisberg]

On Reading Archival Texts: M. Jursa’s Comments to OIP 122 and the Limits of Criticism