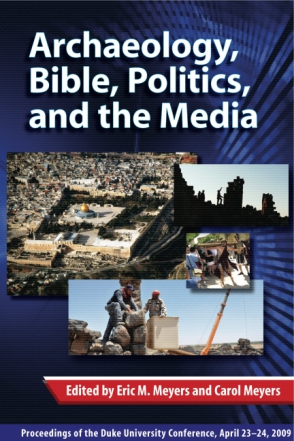 This volume opens a dialogue between scholars and the media, providing both with perspectives that will enable them to become better at communicating what they do to a wide audience. And it offers lay communities who learn about archaeology and the Bible through the popular media information that will make them more sensitive to the way discoveries and issues are presented.

The Media and Archaeological Preservation in Iraq: A Tale of Politics, Media, and the Law Patty Gerstenblith

Part 2: Archaeology and the Media

Fabulous Finds or Fantastic Forgeries? The Distortion of Archaeology by the Media and Pseudoarchaeologists and What We Can Do About It Eric H. Cline

From Ossuary Epigraphs to Flickering Pixels: A Response to Mark Goodacre A. K. M. Adam

The Power of the Press: The Effects of Press Releases and Popular Magazines on the Antiquities Trade Morag M. Kersel

History and Fiction: Comments on Morag M. Kersel’s “The Power of the Press” Annabel Wharton

Confessions of an Archaeologist: Lessons I Learned from the Talpiyot Tomb Fiasco and Other Media Encounters Jodi Magness

An Ancient Medium in the Modern Media: Sagas of Semitic Inscriptions Christopher A. Rollston

Community and Antiquities at Umm el-Jimal and Silwan: A Comparison Bert de Vries

Archaeology, Identity, and the Media in Cyprus Thomas W. Davis

The Quest for the Temple Mount: The Settler Movement and National Parks in Israel Eric M. Meyers

On Tourism and Politics in Israel: A Response to Eric Meyers Rebecca L. Stein

Part 4: Voices of the Media

Areas of Concern as We Go Forward Moira Bucciarelli

Scholars at the Limits of Science and the Borders of Belief: Finding Proof for Faith. A Journalist’s Perspective on the Oded Golan Case Nina Burleigh

Not Another Roadside Attraction: The Holy Land Experience in America Mark I. Pinsky

Part 5: The Media: A View from Jerusalem

How It Looks from the Other Side Ethan Bronner