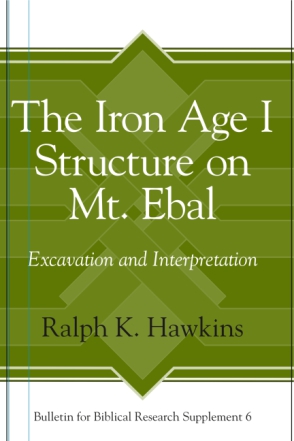 In 1980, during the survey of the territory of Manasseh, Israeli archaeologist Adam Zertal discovered a site on Mt. Ebal dating to the period of Iron I, during which the Israelites began to sedentarize in the central hill country of Canaan. The site was excavated over eight seasons, from 1982 to 1989, under the auspices of the University of Haifa and the Israel Exploration Society. In 1985, Zertal published an article in which he suggested that the structure on Ebal may have been the altar of Josh 8:30–35.

In The Iron Age I Structure on Mt. Ebal, Ralph Hawkins reviews the excavation on Mt. Ebal and its results, including the scarabs, seals, and animal bones found there. He examines the architecture of the site in relation to Mesopotamian watchtowers, altars, and the descriptions of altars in mishnaic materials, Ezekiel, and Deuteronomic passages.

This fascinating book examines the Mt. Ebal site using a comparative method for both the physical data and the textual data. The site and its artifacts are analyzed and then compared with alternative proposals and literary traditions. The site is placed in its broader regional context in order to determine how it might relate to the larger settlement picture of Iron Age I. The primary purpose is to examine the data with a view to determining the nature and function of the site and its possible relation to Josh 8:30–35. A compelling read for biblical and archaeological students and scholars, who will better be able to envision sites of past events.

1. Discovery and Excavation of the Ebal Structure

Overview of the Survey of Manassesh

Overview of the Discovery and Excavation of the Mt. Ebal Complex

Overview of Zertal’s Conclusions Regarding the Ebal Site

Methodology and Criteria for the Identification of the Site

2. Analysis of the Ebal Installation

Location and Layout of the Site

House or Other Domestic Space

The Central Structure at Mt. Ebal and the Four-Room House

Towers in the Late Bronze Age

Towers in Iron Age I

The Tower of Shechem

Location of the Site

The Faunal Assemblage from Mt. Ebal

6. The Ebal Structure in Context: The Ebal Installation, the Survey of Manasseh, and the Emergence of Israel

Historical and Sociological Considerations of the Mt. Ebal Site

An Overview of Regional Surveys in Israel

The Survey of Manasseh Compared with Joshua, Judges, and the Question of Israelite Origins

Index of Sites and Geographical Names