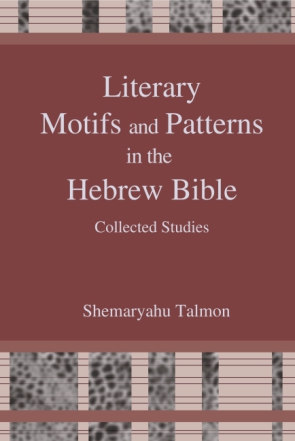 In this volume, many of Talmon’s contributions are made accessible in fresh form to the benefit of both those who already know his work and to a newer generation of scholars for whom his work continues to prove important.

2) THE MESSAGE OF THE ‘BARREN WIFE’ MOTIF

3) CONCEPTUAL PATTERNS OF HISTORY IN THE HEBREW BIBLE

4) LITERARY PATTERN AND MOTIFS IN THE BIBLICAL CREATION TRADITION

9) HAR AND MIDBAR: AN ANTITHETICAL PAIR OF BIBLICAL MOTIFS

10) THE SIGNIFICATION OF JERUSALEM IN BIBLICAL THOUGHT

11) EXILE – DIASPORA – RESTORATION IN THE CONCEPTUAL UNIVERSE OF BIBLICAL ISRAEL

12) THE SIGNIFICATION OF ‘LIFE’ IN ANCIENT ISRAELITE THOUGHT

13) יד ושם: A Biblical Idiomatic Phrase and its Variations

18) WAS THE BOOK OF ESTHER KNOWN TO AUTHORS OF THE COMMUNITY OF THE ‘RENEWED COVENANT’?