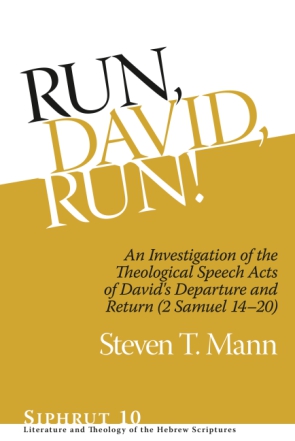 The thesis of this study is that speech act theory illuminates the integral role of theology in the story of David’s departure and return. Theology is not merely one aspect of the story but is in fact a catalyst necessary to the plot. Furthermore, the act of telling the story as 2 Sam 14–20 does is the very act of portraying David’s faith in Yhwh. David’s speech acts demonstrate that he believes that Yhwh is someone who intervenes and who finds ways to bring his banished ones back to him. The narrative portrayal of David’s faith can be understood as an illocutionary act, with the potential effect of encouraging an audience, a perlocutionary act. In other words, Man demonstrates that this story can inspire any readers who see this narrative as a story not only about David but about themselves.

Chapter 1. How to Do Things with Theological Words

Chapter 2. An Overview of Perspectives on the Function of 2 Sam 14–20

To Answer the Question of the Succession to David’s Throne

To Serve a Political Agenda

To Provide a Work of Art

A Proposal: To Portray David’s Faith in Yhwh

The Application of SAT to Narrative Discourse

Recent Applications of SAT to Stories of King David

Chapter 4. Theological Words from the Wise

Chapter 5. Theological Words from the Banished

Chapter 10. David’s Departure and Return as Illocutionary and Perlocutionary Act

Telling a Story that Portrays David’s Faith: An Illocutionary Act

Running with David: A Perlocutionary Act