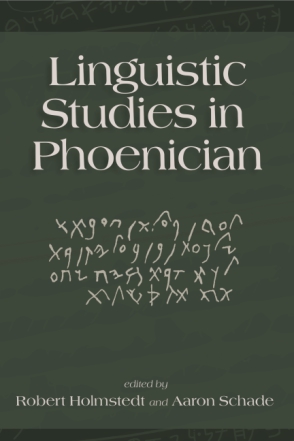 This collection of studies dedicated to his memory is aimed at advancing our understanding of the grammatical and historical features of the Phoenician language, a favorite topic that Professor Peckham rigorously studied and taught. The first set of studies concentrates on linguistic features of Phoenician qua Phoenician. They include investigations of phonology and morphology, as well as linguistic approaches to syntax and text-level pragmatics. The second set of studies seeks to situate aspects of the Phoenician language typologically or within comparative, etymological, and historical Semitics. The result is a group of studies covering topics ranging from case endings, negation, pronominal usage, and phonology to dialectology, etymologies, and text linguistics. Given the use of Phoenician throughout the Mediterranean littoral, this volume contains something of interest for numerous areas of investigation, including comparative Semitics, Anatolian, early Mediterranean, and even Hebrew and biblical studies.

The Phoenician Words mškb and ʿrr in the Royal Inscription of Kulamuwa (KAI 24.14–15) and the Body Language of Peripheral Politics Philip C. Schmitz

The Syntax and Pragmatics of Subject Pronouns in Phoenician Robert D. Holmstedt

The “Narrative Infinitive” in Phoenician and Its Background: A Discourse Analysis Approach The Linguistic Position of Old Byblian Holger Gzella