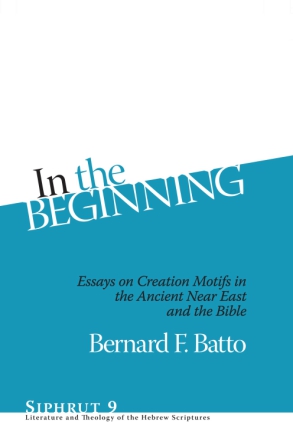 The articles in the volume were written as independent essays. Nevertheless, they are united by theme. Throughout, Batto makes clear his understanding of the Hebrew Bible as a patently unique text, yet one that cannot possibly be understood independent of greater cultural sphere in which it developed. In the Beginning will serve as an indispensable resource for those interested in both the biblical ideas of creation and the mythology of the ancient Near East that influenced them.

The Ancient Near Eastern Context of the Hebrew Ideas of Creation

1. Was a Paradise Motif Known in Mesopotamia?

2. Is There a Paradise Motif in Genesis?

The Institution of Marriage in Genesis 2 and in Atrahasis

1. The Institution of Marriage in Atrahasis

The Divine Sovereign: The Image of God in the Priestly Creation Account

1. Divine Sovereignty in the Ancient Near East

2. Yahweh’s Kingship in the Hebrew Bible

3. The Image of the Deity in the Priestly Creation Story

The Sleeping God: An Ancient Near Eastern Motif of Divine Sovereignty

1. The Motif within Its Ancient Near Eastern Setting

2. Biblical Appropriations of the Motif of Sleeping Deity

The Reed Sea: Requiescat in Pace

The Covenant of Peace: A Neglected Ancient Near Eastern Motif

1. The Biblical Covenant of Peace

4. The Motif of Planting Peace

The Malevolent Deity in Mesopotamian Myth

2. Gods Proper Who on Occasion Act as Malevolent Deities