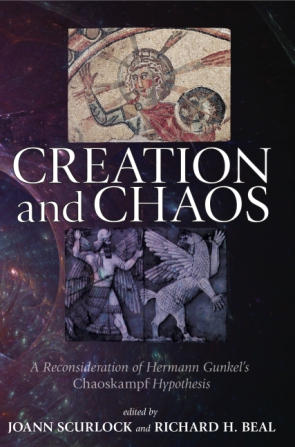 The problem with Gunkel’s theory is that it did not simply identify common elements in the mythologies of the ancient Near East but imposed upon them a structure dictating the relationships between the elements, a structure that was based on inadequate knowledge and a forced interpretation of his sources. On the other hand, one is not entitled to insist that there was no cultural conversation among peoples who spent the better part of several millennia trading with, fighting, and conquering one another.

Creation and Chaos attempts to address some of these issues. The contributions are organized into five sections that address various aspects of the issues raised by Gunekl’s theories.

From Hesiod’s Abyss to Ovid’s rudis indigestaque moles: Chaos and Cosmos in the Babylonian “Epic of Creation” Karen Sonik

On the Theogonies of Hesiod and the Hurrians: An Exploration of the Dual Natures of Teššub and Kumarbi Dennis R. M. Campbell

Creation in the Bible and the Ancient Near East W. G. Lambert†

Searching for Meaning in Genesis 1:2: Purposeful Creation out of Chaos without Kampf JoAnn Scurlock

Once upon a Time in Kiškiluša: The Dragon-Slayer Myth in Central Anatolia Amir Gilan

Yamm as the Personification of Chaos? A Linguistic and Literary Argument for a Case of Mistaken Identity Brendon C. Benz

Part 3: Gunkel and His Times

Chaos and Creation: Hermann Gunkel between Establishing the “History of Religions School,” Acknowledging Assyriology, and Defending the Faith Steven Lundström

Where Is Eden? An Analysis of Some of the Mesopotamian Motifs in Primeval J Peter Feinman

The Combat Myth as a Succession Story at Ugarit Wayne T. Pitard

What Are the Nations Doing in the Chaoskampf? Robert D. Miller II

The Three “Daughters” of Baʿal and Transformations of Chaoskampf in the Early Chapters of Genesis Richard E. Averbeck

Index of Ancient Texts and Objects