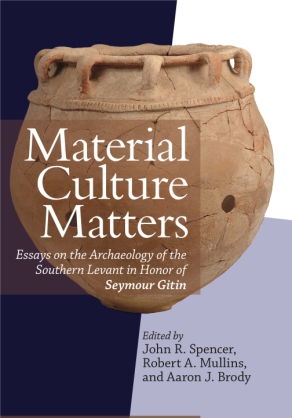 The articles range from a discussion of tomb robbing in Palestinian areas, to a geographical analysis of the Shephelah region, to Islamic historical texts, to Israelite cult stands, to Middle Bronze Age burials. In addition, there are several articles by former members of the Tel Miqne–Ekron staff that draw on the finds from that site and further demonstrate Sy’s willingness to mentor and to share the publication of the site’s rich trove of materials.

This book not only honors Dr. Gitin by the willingness of fellows to contribute to the volume; it also expands our knowledge base of the southern Levant and shows that “Material Culture Matters.”

The Southwestern Border of Judah in the 9th and 8th Centuries B.C.E. Jeffrey A. Blakely, James W. Hardin, and Daniel M. Master

New Perspectives on the Chalcolithic Period in the Galilee: Investigations at the Site of Marj Rabba Yorke M. Rowan and Morag M. Kersel