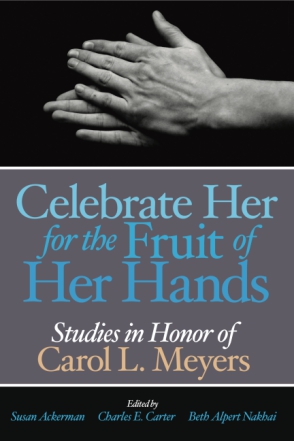 Joining this community of Carol Meyers’s peers are some of her most noted students, who also have contributed essays that speak to Meyers’s many areas of interest and expertise and reflect what they have learned from her about, especially, the study of women in the Bible and in ancient Israel, and the application of social-scientific approaches to biblical studies. Moreover, as Meyers’s work spans the millennium-long history of the Iron Age and the Second Temple period, so do the essays of Meyers’s students, with offerings that consider some of the earliest texts in the Bible (Judges 5), as well as texts that come from the Second Temple archive of scrolls discovered at Qumran.

The result is a collection of essays that are as richly multifaceted as is the work of the extraordinary scholar whose career they honor.

A Select Bibliography of the Works of Carol L. Meyers

Speaking as “Any Foolish Woman”: Ms. Job in the History of Reception (Rhonda Burnette-Bletsch)

Numbers 5:11-31: Women in Second Temple Judah and the Law of the Controlling Priest (Claudia V. Camp)

“There Is Much Wisdom in Her”: The Matriarchs in the Qumran Library (Sidnie White Crawford)

Regarding the Bible as Agrarian Literature (Ellen Davis)

Structure and Origin of the Early Israelite and Iroquois Confederacies (Norman K. Gottwald)

The Place of Biblical Studies in the University Curriculum: Beyond the Religious/Secular Divide (Sandie Gravett)

Bargaining with Patriarchy in the Book of Ruth (F. V. Greifenhagen)

The Story of David and Goliath from the Perspective of the Study of Oral Traditions (Raymond F. Person Jr.)

I Sing the Body Politic: Stillborn Desire and the Birth of Israel in Judges 5 (Anathea Portier-Young)