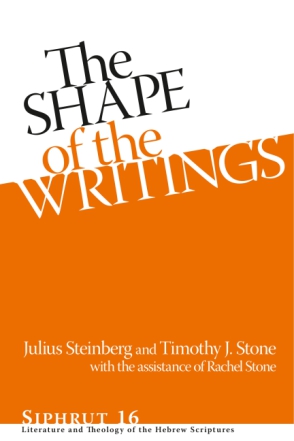 The Historical Formation of the Writings in Antiquity Julius Steinberg and Timothy J. Stone

Final Forms of the Writings: The Jewish and Christian Traditions Peter Brandt

A Wandering Moabite: Ruth—A Book in Search of a Canonical Home Stephen Dempster

The Place of Wisdom Literature in an Old Testament Theology: A Thematic and Structural-Canonical Approach Julius Steinberg

The Search for Order: The Compilational History of Ruth Timothy J. Stone

The Associative Effects of Daniel in the Writings Amber Warhurst

Chronicles as the Intended Conclusion to the Old Testament Canon Hendrik J. Koorevaar

Torah-Binding and Canon Closure: On the Origin and Canonical Function of the Book of Chronicles Georg Steins

“A Threefold Cord Is Not Quickly Broken”: Interpretation by Canonical Division in Early Judaism and Christianity Stephen B. Chapman