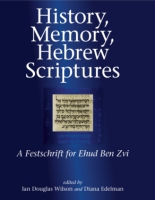 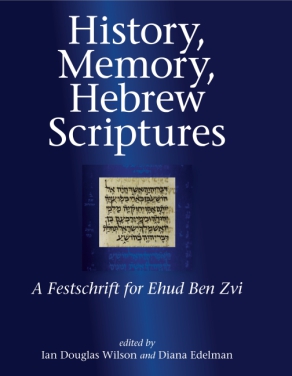 “The book serves as a useful reference and develops many of Ben Zvi’s earlier textual observations. It will undoubtedly find a well-deserved place on the library shelves of many students as well as biblical scholars.”—Jeffrey P. Hudon, Review of Biblical Literature

Ehud Ben Zvi is one of the foremost scholars in the field of Hebrew Bible today. He has had a global impact both as a researcher and as a teacher, and he continues to create cutting-edge research that is helping to shape the future of the field. This volume marks his upcoming retirement from the University of Alberta and honors him and his career as a scholar and educator. Thirty-one papers written by a select group of colleagues, including several former students and a former teacher, are presented under three sub-headings: History and Historiography; Prophecy and Prophetic Books; and Methods, Observations, (Re)Readings. These categories represent the wide-ranging interests of Ehud himself and include contributions on the Bible as social memory, for which he has been a leading advocate and theorist in the past decade.

“The book serves as a useful reference and develops many of Ben Zvi’s earlier textual observations. It will undoubtedly find a well-deserved place on the library shelves of many students as well as biblical scholars.”—Jeffrey P. Hudon, Review of Biblical Literature

Menachem’s Massacre of Tiphsah: At the Crossroads of Grammar and Memory (2 Kings 15:16) Bob Becking

Images of Tranquility in the Book of Judges Susanne Gillmayr-Bucher

When the Foreign Monarch Speaks about the Israelite Tabernacle Gary N. Knoppers

Putting the Neighbors in Their Place: Memory and Mindscape in Deuteronomy 2:10–12, 20–23 William Morrow

Righteous Kings, Evil Kings, and Israel’s Non-Monarchic Identity: Different Voices on the Failure of Israelite Kingship in the Book of Kings Reinhard Müller

Conceptions of the Past and Sociocultural Grounding in the Books of Samuel Frank H. Polak

“In the House of Judah, My Father’s House”: The Character of Joab in the Book of Chronicles Kenneth A. Ristau

The Chronological Limits of Reshaping Social Memory in the Presence of Written Sources: The Case of Ezekiel in Late Persian and Early Hellenistic Yehud Philippe Guillaume

Who’s Speaking? On Whose Behalf? The Book of Haggai from the Perspective of Identity Formation in the Persian Period Louis Jonker

These Seventy Years: Intertextual Observations and Postulations on Jeremiah and the Twelve James Nogalski

Some Sort of “Chronistic” Additions to the Torah? New Perspectives in the Formation of Exod 19–20 Rainer Albertz

The Metaphor of Torah as a Life-Giving Well in the Book of Deuteronomy Diana V. Edelman

The Ritual of Reading and the Dissemination of Prophetic and Other Authoritative Texts in Second Temple Judaism Michael H. Floyd

History and the Nature of Cultural Memory: The Alamo and the “Masada Complex” Lester L. Grabbe

Between the Words I Write Francis Landy

Is Ehud also among the Prophets? Prophecy in the Book of Judges Christoph Levin

Index of Other Ancient Literature