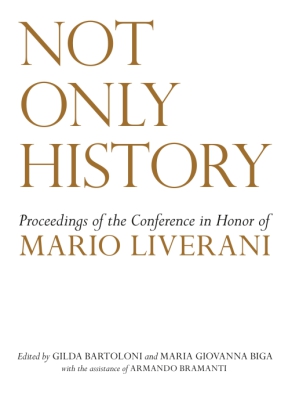 The title chosen for the conference was “Not Only History/Non solo storia,” which alludes to Liverani’s multiple interests and forays into the field of the ancient Near East and Egypt. A select group of scholars and colleagues was chosen to represent Prof. Liverani’s fields of interests, because it was impossible to include all of the Italian and international colleagues who could have been invited. Even so, the list of eminent contributors in the fields of ancient Near Eastern history, art, linguistics, and archaeology is more than adequate to recommend acquisition of this fine collection: John Baines (Oxford), Dominique Charpin (Collège de France), Joaquín María Córdoba (Universidad Autónoma de Madrid), Jerrold Cooper (Johns Hopkins), Jean-Marie Durand (Collège de France), Peter Machinist (Harvard), David Mattingly (University of Leicester), Piotr Michalowski (University of Michigan), Nadav Naʾaman (Tel Aviv University), Nicholas Postgate (Cambridge), Johannes Renger (Free University of Berlin), Marc Van de Mieroop (Columbia University), Irene Winters (Harvard), and Norman Yoffee (University of Michigan).

Johannes Renger: Weber—Polanyi—Sraffa: A Consideration of Modes of Production

Irene J. Winter: The Court Banquets of Sargon II of Assyria: Commensality as a Positive Affirmation of the (Successful) Hunt and Battle

Dominique Charpin: State and Society: Flight in the Near East during the Old Babylonian Period (20th–17th Centuries BCE)

Piotr Michalowski: The Ur III Literary Footprint and the Historian

John Baines: On Egyptian Elite and Royal Attitudes to Other Cultures, Primarily in the Late Bronze Age

David Mattingly: The Garamantes and After: The Biography of a Central Saharan Oasis 400 BC–AD 1900

Nadav Na'aman: The “Kenite Hypothesis” in the Light of the Excavations at Horvat Uza