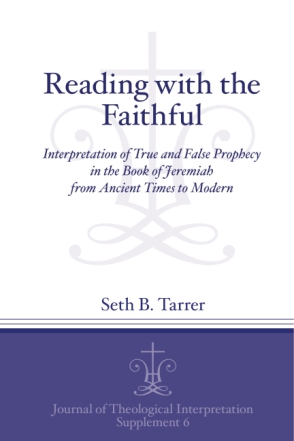 Origen, writing sometime in the mid-third century on the Gospel of John, has charted a course for the subsequent history of interpretation of true and false prophecy. Although Tarrer’s study is concerned primarily with various readings of Jeremiah’s construal of the problem, the ambiguity inherent in Origen’s statement is glaring nonetheless.

This monograph is a study of the history of interpretation. It therefore does not fit neatly into the category of Wirkungsgeschichte. Moving through successive periods of the Christian church’s history, Tarrer selects representative interpretations of Jeremiah and Ezekiel in later theological works dealing explicitly with the question of true and false prophecy in an effort to present a sampling of material from the span of the church’s existence. As evidenced by the list of “false prophets” uncovered at Qumran, along with the indelible interpretive debt owed by Christian interpreters such as Jerome and Calvin to Jewish exegetical methods, Jewish interpretation’s vast legacy quickly exceeds the scope of this project. From the sixteenth century onward, the focus on the Protestant church is, again, due to economy. In the end, Tarrer concludes that the early church and pre-modern tradition evidenced a recurring appeal to some form of association between Jeremiah 28 and the deuteronomic prophetic warnings in Deuteronomy 13 and 18.