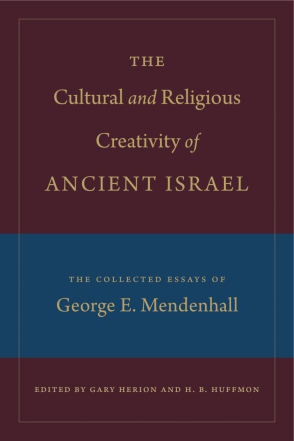 Mendenhall’s corpus of more than one hundred books, articles, and reviews has stimulated remarkable work by scholars in the twentieth century. Even today, students of the Bible, the ancient Near East, archaeology, Judaism and Christianity, and even theology will find in these essays untapped veins of material for future study and provocative insights about a wide range of still-critical issues, suggesting that Mendenhall’s work can continue to galvanize a rich agenda for the study of biblical faith and history in the twenty-first century. The volume contains critical essays by Gary A. Herion, Herbert B. Huffmon, and Peter Machinist that summarize Mendenhall’s impact on ancient and biblical studies; links for downloading a recent film documentary on Mendenhall’s life and work; and excerpts from Mendenhall’s autobiography, which he was working on at the time of his death.This volume contextualizes and updates the lesser-known work of this well-known and celebrated biblical scholar. It will be welcomed by students and specialists of the ancient Near East, Semitic linguists, theologians, interested clergy and laity, and, in particular, those who study the creative formation of religious traditio

Herbert B. Huffmon is Professor Emeritus of Old Testament Studies at Drew University.

Excerpts from My Life of Adventure: The Early Years by George E. Mendenhall

I. General Perspectives on Religion and the Human Condition

The Conflict between Values Systems and Social Control (1975)

II. Approaches to the History of Ancient Israel

Migration Theories vs. Cultural Change as an Explanation for Early Israel (1976)

Method in the Study of Early Hebrew History (1964)

The Ancient in the Modern—And Vice Versa (1976)

Toward a Method for Historical Lexicography of Semitic Languages (1990)

Biblical Interpretation and the Albright School (1987)

III. Praeparatio: The Near Eastern Context of Ancient Israel

Jerusalem in the Amarna Letters (2007)

Cultural History and the Philistine Problem (1986)

IV. The Formative Period: The Origins and Formation of Yahwistic Israel

The Hebrew Conquest of Palestine (1962)

“Change and Decay in All Around I See”: Conquest, Covenant, and the Tenth Generation (1976)

Between Theology and Archaeology (1978)

V. The Adaptive Period: Yahwistic Faith in an Ancient Near Eastern Setting

The Nature and Purpose of the Abraham Narratives (1987)

VI. The Traditional Period: Religion under the Monarchy

Prophecy and Poetry in Modern Yemen (2000)

VII. Reformation: Reappraisals of Tradition after the Monarchy

From Witchcraft to Justice: Death and Afterlife in the Hebrew Bible (1992)

Appendix 1: George E. Mendenhall: A Bibliography of His Writings and Publications (1938–2007)

The Quest for the Kingdom of God

Song of Power and the Power of Song

Essays on the Book of Deuteronomy