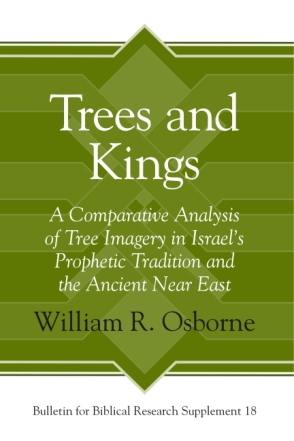 The Old Testament prophets did not hesitate to use the rhetorical conventions accessible to them when delivering their sermons of salvation and judgment. One source of comparison used frequently in the prophets and widely throughout the ancient Near East is the image of a tree. In Trees and Kings, William Osborne evaluates the cultural and cognitive setting that potentially gave rise to this figurative tree imagery, drawing on both comparative study with ancient Near Eastern tree imagery and the cognitive-linguistic approach to metaphor theory.

Osborne examines tree metaphors that appear in the texts of Israel's writing prophets, specifically Isaiah, Jeremiah, and Ezekiel. He takes this material as largely reflective of the Israelite prophetic tradition from the 8th–6th centuries BC. Tree imagery in the Old Testament is certainly not limited to these prophetic books, and this study takes many of these texts into consideration in seeking to understand tree imagery in Isaiah, Jeremiah, and Ezekiel better. The question is rarely asked, why do the prophets often defer to the metaphorical use of the tree? The goal of this study is to answer this important question by comparing and contrasting tree metaphors in much of the prophetic literature of the Old Testament with tree imagery and metaphors encountered from the ancient Near East.

William R. Osborne is Assistant Professor of Biblical and Theological studies at College of the Ozarks.

Previous Research and the Present Study

Gods and Trees in Ancient Egypt

Tree Metaphors and Imagery in and around the Biblical Text

Trees and the Righteous

4. Trees and Kings in Isaiah, Jeremiah, and EzekielIntroduction

Trees and Kings in Isaiah

Tree and Kings in Jeremiah

Trees and Kings in Ezekiel

Appendix: A Catalog of Tree Imagery in the Books of Isaiah, Jeremiah, and Ezekiel

Making Sense of the Divine Name in the Book of Exodus

From Etymology to Literary Onomastics

A Reexamination of the Name Command of the Decalogue