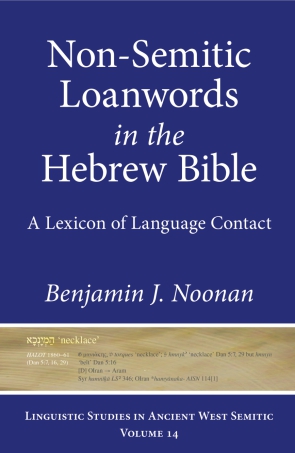 In this volume, Noonan identifies all the Hebrew Bible’s foreign loanwords and presents them in the form of an annotated lexicon. An appendix to the book analyzes words commonly proposed to be non-Semitic that are, in fact, Semitic, along with the reason for considering them as such. Noonan’s study enriches our understanding of the lexical semantics of the Hebrew Bible’s non-Semitic terminology, which leads to better translation and exegesis of the biblical text. It also enhances our linguistic understanding of the ancient world, in that the linguistic features it discusses provide significant insight into the phonology, orthography, and morphology of the languages of the ancient Near East. Finally, by tying together linguistic evidence with textual and archaeological data, this work extends our picture of ancient Israel’s interactions with non-Semitic peoples.

A valuable resource for biblical scholars, historians, archaeologists, and others interested in linguistic and cultural contact between the ancient Israelites and non-Semitic peoples, this book provides significant insight into foreign contact in ancient Israel.

Benjamin J. Noonan is Associate Professor of Old Testament and Hebrew at Columbia International University. He is coeditor of “Where Shall Wisdom Be Found?” A Grammatical Tribute to Professor Stephen A. Kaufman, also published by Eisenbrauns.

1.2 Corpus and Parameters of This Study

2.3 The Hittites and Luvians

3. Non-Semitic Loanwords in the Hebrew Bible

4.6 Loanwords and Parts of Speech

4.7 Loanwords and Domain of Use

6. Evidence for Dialect of Origin and Date of Borrowing

7.3 The Hittites and Luvians