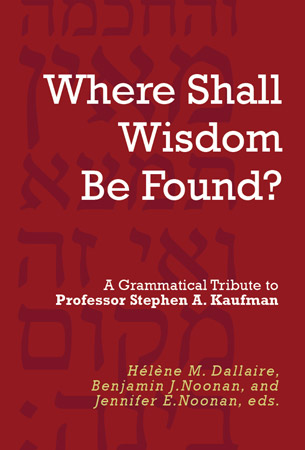 Shaped by the expertise of Professor Kaufman, the scholars who contributed to this volume present recent developments in the study of the morphology, grammar, and syntax of Biblical Hebrew: nouns; adjectives; adverbs; definiteness; prepositions; tense, mood, and aspect; the verbal stems (binyanim); qatal; yiqtol;Â volitives; weqatal; wayyiqtol; participles; infinitives; conjunction and disjunction; Hebrew poetry; and Hebrew pedagogy. The volume is intended to serve as a scholarly resource for those interested in the morphological and syntactic features of Biblical Hebrew and as a textbook for advanced Biblical Hebrew classes in institutions of higher learning.

Congratulatory Remarks from the Director of the Pines School of Graduate Studies, HUC-JIR

Words of Thanks and Tribute: A Colleague's Appreciation

Reflections on a Significant Scholar, Thought-Provoking Professor, and Honorable Man: A Student's Appreciation

Anecdotes in Gratitude of Stephen A. Kaufman: A Student's Appreciation

Publications of Stephen A. Kaufman